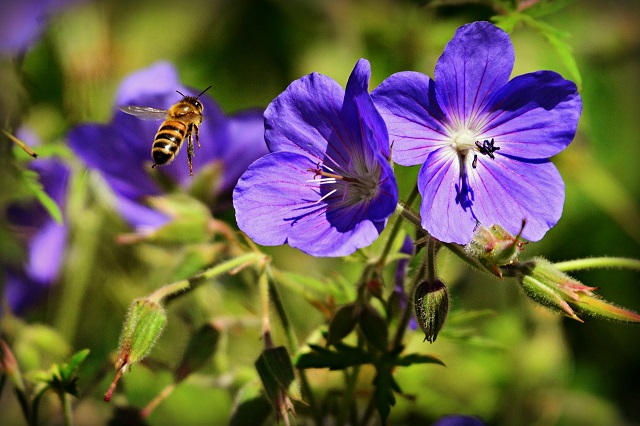 Bees are fascinating creatures that are well-known for making nature’s sugar, honey. But their life is more than just honey and stinging aggressors, they have an organized work system where every little bee has a part to play! Not only that, they can be quite…savage too. Check out the buzzing life of the honey bee with these interesting facts about them!

The Life of Honey Bees

Bees do not live for so long but neither do they just live for one week! Different bees have different lifespans and it varies in the type of environment they are in. Typically,

Worker Bees: range from 6-7 weeks to 4-6 months, depending on how busy they are.

Drone Bees: range from 4 weeks to 4 months, depending on the activity of the hive

Queen Honey Bees: 2-4 years, provided she does not get killed by her hive or the beekeeper.

So, here is the basic lifecycle: the queen bee lays her eggs where three days later, they hatch and become larvae. Six days later when the larvae have grown to its full size, it will spin a cocoon and become pupae. When it is ready after 10 days, the adult bee emerges out. Drone bees take a longer time to emerge whereas queen bees take six days.

Worker bees have a dynamic life. When they come out of their pupae, their first duty is to take clean the hive so that it would be clean enough for the queen to keep laying. After three days, these worker bees become nurse bees where they tend over the larvae and feed them. A couple days later, the nurse bees become wax bees where they create bees wax for honeycomb construction. And finally, when the worker bees are fully matured, they fly off to collect nectar and pollen for the hive. Some of them would attend to the queen to ensure that she is well taken care off!

Another fun fact: worker bees are all female!

The Fate of Drone Bees

Since the female worker bees and the queens have their roles, what to do the male bees do? They are called drone bees and their sole purpose is for mating with the queen.

Drone bees hang out in groups outside the hive where they wait for their virgin queen to fly by. She usually knows where to go.

That’s where the mating begins. Drone bees will go on their mating flight with virgin queen where they violently ejaculate and the queen stores the sperm inside her. Doing all that while flying!

Okay, that’s not the only this they do; they help ward away predators by buzzing out warning signals and the generate heat during winter by shivering or moving warm air with their wings. But their main purpose is mating with the virgin queen. If they do not fulfill their purpose, they will be kicked out of the hive by the worker bees.

Bees Not Only Make Honey

Beeswax: young worker bees make wax by consuming honey and secreting the wax from their bodies. Beekeepers scrape off the wax from the hive and purify it where they can be used for many products like cosmetics, food, and medicine.

Royal Jelly: A substance secreted by nurse bees which are mainly used to feed queen bee larvae. It is used as a dietary supplement for humans as it contains antioxidants, vitamins, and antihistamines.

Propolis: AKA bee glue made with bee saliva and wax where is used sealing the hive. Propolis is used for medicines and supplements, varnishing string instruments and waxing cars.

So, if you see a little bit of wax in your honey or been told to take royal jelly, don’t waste them! The bees work extremely hard to make them.

How Honey Bees Pollinate A Lot of Our Food

About 1/3 of the food in the world is produced by bees. And every 3 to 4 bites of food you eat has been produced by the bees. Indirectly of course, bees help to pollinate both food and non-food crops so that they bear fruit and the materials key to life. The fruit from these plants contain seeds where they are used to grow more plants for consumption again.

However, there is news that the bees and dying and their numbers are dropping. This is due to the diseases, pesticides, and lack of safe places for bees to reproduce. Colonies collapse because they are unable to survive the winters. If the bees all die out, we definitely will not starve. But food production will definitely be much, much slower.

So, the next time you see a bee, don’t kill it and let it bee on its way. And maybe if you got some time and money (and your country regulations allow it), try out urban bee farming! You will be doing your part maintaining the bee populations and you get some goodies at the same time.

What do you guys think of bees? They are pretty cool right! Leave a comment below and tell us!

Check out the Nutrinest to learn more about Mr Xavier Tan’s conservation efforts of the local bee population, humane removal of beehives and more!

For more information about how bees work, check out this story by HowStuffWorks!

Learn something new with our articles! Click here for more!